Home > Building Resilience > On Having a Great Vision, and Not ‘Blowing an Uncertain Trumpet’

On Having a Great Vision, and Not ‘Blowing an Uncertain Trumpet’ 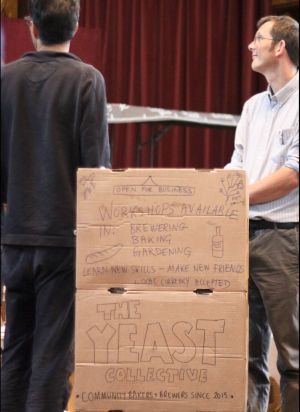 My friend Lucy Neal sent me a photo of me the other day, taken at the Transition Network conference in 2012 at Battersea Arts Centre.  On the final day of the event, we did a remarkable exercise, the Transition Town Anywhere High Street, designed and facilitated by Ruth Ben-Tovim of Encounters Arts.  Over the space of a morning, we built, from scratch, using just our hands, our imaginations, the relationships and common interests we had forged with those around us, as well as lots of cardboard and sticky tape, a High Street.  It was a High Street of shops, businesses, health services, open spaces, all with its own internal logic and instinctive circular economy.  It was one of the most remarkable and magical things I have ever been part of.  Here’s that photo (see right).

I had come together with others interested in creating a business on our High Street which was built around yeast.  It was called ‘The Yeast Collective’.  In the photo, the sign for our business reads “The Yeast Collective: community bakers and brewers since 2015” (the exercise was set sometime in the future).  It continued, “workshops available in brewing, baking, gardening. Learn new skills, make new friends.  Local currency accepted”, as well as, to one side “hop growing”. 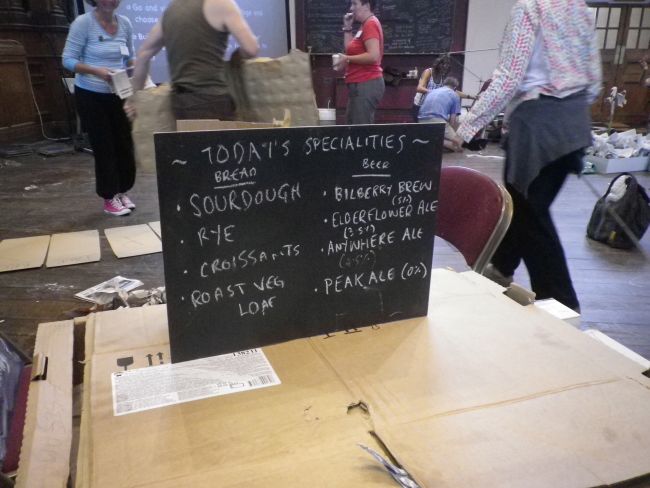 A dream is a fantasy, an aspiration that has yet to touch the ground.  We have them all the time.  A vision has power to it.  Ari Weinsweig, writing at Inc.com, writes:

“What is a vision? It’s not as mystical or out there as it sounds.  A vision, quite simply, is a picture of what success will be at a particular time in the future”.  He continues, “A great vision is inspiring. It gets you and everyone in the organization excited to come to work; it’s the cathedral everyone is coming to work every day to construct. This is not mere wishful thinking. A vision must also be strategically sound. You have to have a reasonable shot at getting there”.

As Theodore Hesburgh put it, “it’s got to be a vision you articulate clearly and forcefully on every occasion. You can’t blow an uncertain trumpet”.  But as well as just being “a picture of what success will be at a particular time in the future”, a vision for me is something you feel.  It fills your mind’s eye, it’s something you can see, taste, touch, even though it doesn’t exist yet.  Creating, with others, our Yeast Collective, and standing in it, imagining the beer in the fermenters, the bread rising, customers calling in, and the conversations we had, my dream took a huge step forward.  I was going to do this.  It felt fantastic.  How empty would my life feel if I didn’t make it happen? 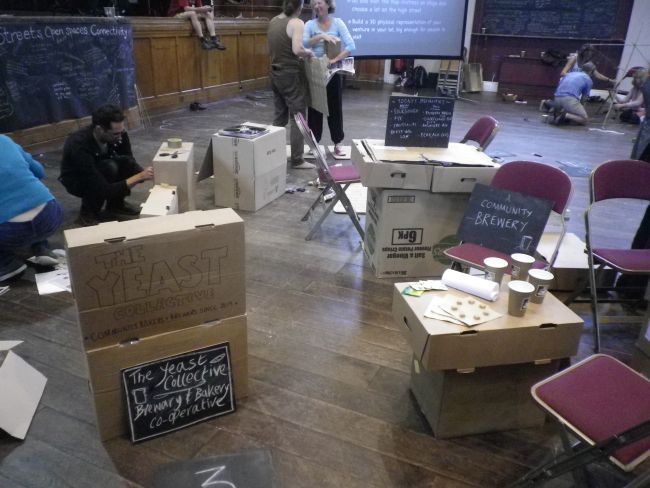 Fast forward 4 years, and I can take you to see The Yeast Collective, or at least a version of it.  New Lion Brewery has now been running for 3 years thanks to the fantastic team of people who came together to make it happen.  We make awesome beer, employ 3 people, and are rooted in the economy of my town.  While we don’t also bake bread, we are very good friends with the best bakers I’ve ever experienced, who are just up the road and who use our Totnes Stout in one of their breads.  We accept local currency.  We run courses on how to brew your own beer.  And yes, we also grow hops, through our recently-launched Hop Club!

I was reminded of this when I recently watched the brilliant new documentary, ‘Blood, Sweat & Beer’.  It tells the story of the explosion of craft beer in the US, where there are now 3,400 breweries, of which 99% are craft breweries, a rapidly growing sector that has reimagined beer while also catalysing many new small independent businesses.  The film follows several stories of people starting new breweries.  One tells of Asa and Matt, two young men in their early 20s, who start The Brew Gentlemen Beer Company in Braddock, PA, along with their brewer Brandon. 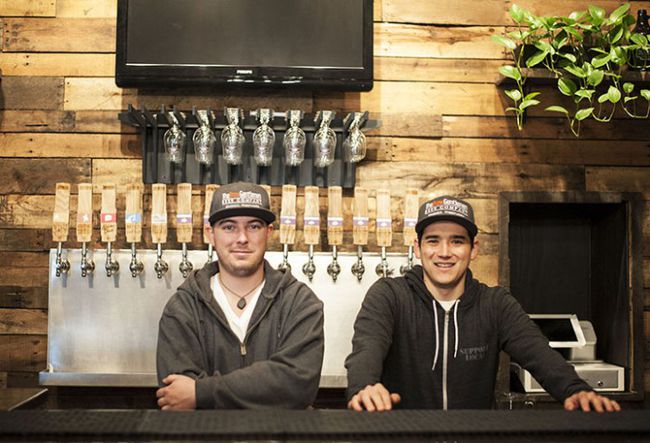 Braddock was a steel town, close to Pennsylvania, hit firstly by the closure of its steel mills and secondly by the epidemic of crack cocaine in the 80s and 90s.  Its population fell from 20,000 to 2,000, and reached a stage where even the liquor stores were closing.  In this most unpromising of settings, Matt and Asa decide to open a craft brewery, and spend 3 years renovating an old building on the Main Street to turn it into a brewery.  It’s an eventful journey, a story told in the film.

At the film’s close, we join them at their Grand Opening.  There are many tears among the beers, many proud and emotional relatives, and Asa says:

“it’s what we’ve done every day since we graduated college.  This is all we wanted to do … and it’s finally happened”.

You don’t get to those moments without a vision.  A dream isn’t enough.  You don’t have to build a cardboard High Street (although it helps) … but give yourself the space to imagine it, pick a fixed point in the future, and give yourself permission to vision something fabulous.  You never know where you’ll find yourself standing in a few years.