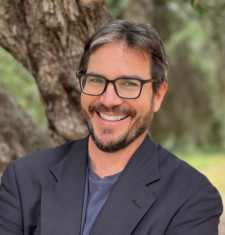 Dr. Peter Kalmus is a climate scientist at NASA’s Jet Propulsion Laboratory and a well-known climate activist. He is the recipient of NASA’s prestigious Early Career Achievement Medal and has over 100 peer-reviewed scientific publications. Peter started his career in astrophysics, obtaining a B.Sc. in physics from Harvard College and a Ph.D. in physics from Columbia University, and leading searches for gravitational waves from magnetars and supernovae with the LIGO collaboration. He then made a major career switch into climate science in 2012 due to his mounting climate concern, which made studying astrophysics feel like fiddling while the entire Earth (including Rome) burned.

As an activist, Peter was the first US organizer of Fridays For Future; he co-founded Earth Hero, the world’s most popular climate app; and he co-founded the Climate Ad Project, the first ad agency for the Earth. He is the author of the award-winning book, Being the Change: Live Well and Spark a Climate Revolution, and a regular op-ed contributor to The Guardian. Peter leads several climate projects at NASA, including a major new multidisciplinary project using satellite data, global climate models, and ground-breaking data science methods to predict when deadly humid heat beyond the human body’s ability to survive will emerge in the world’s cities with neighborhood-scale precision, a project Adam McKay called “without exaggeration, the most important scientific work in history.” Peter lives a low-carbon lifestyle in California with his wife and two sons, which includes lots of gardening, bicycling, and backpacking. He believes climate scientists have a responsibility to take strong action as activists in order to help the public recognize that humanity is in a genuine climate emergency, and he does everything he can to shift society into “climate emergency mode” as quickly as possible.