A Community Resilience Take on The Great Transition

A review of Bounding the Planetary Future: Why We Need a Great Transition by Johan Rockström. 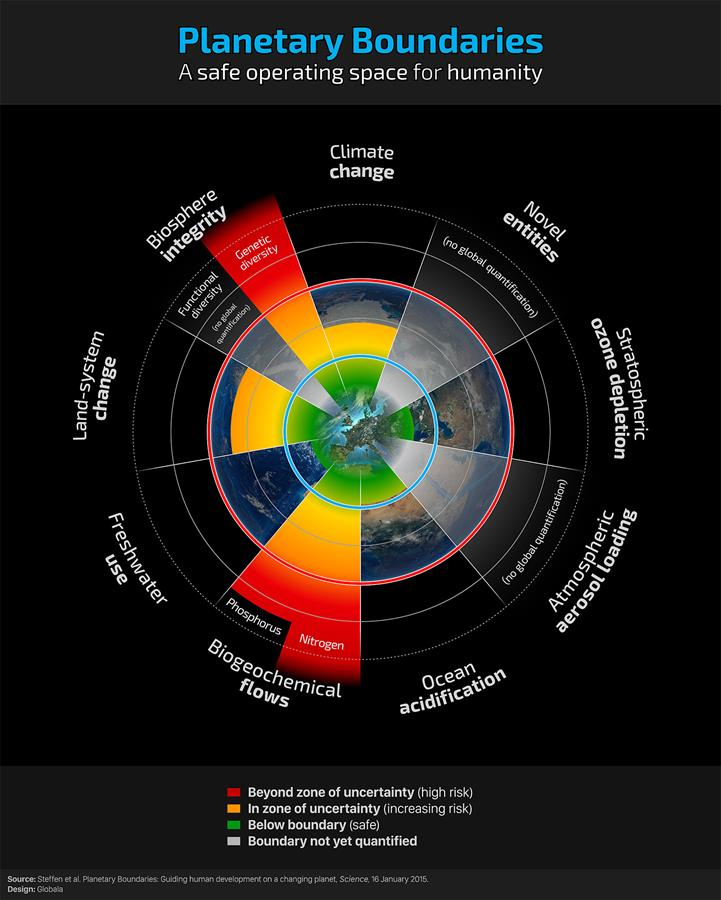 “Planetary boundaries” research constitutes an important advance in our ability to identify and quantify the components of global overshoot. Permit me to suggest that all presentations on planetary boundaries should include a discussion of Liebig’s Law—an ecological truism that can be boiled down to “a chain is only as strong as its weakest link.” We don’t have to wait for all nine boundaries to be transgressed before global calamity threatens; all it takes to shred the ecosystem web is for one boundary to be breached far enough, long enough. Seen in that light, the fact that four out of nine identified boundaries are already far behind us should be cause for profound concern.

Nevertheless, Johan Rockström’s exposition follows the familiar and necessary formula: industrial civilization is propelling us toward planetary collapse, but there is still time to change civilization’s operating system so as to ensure survival and well-being for everyone, even as population continues to grow. I have used that formula in essays and lectures any number of times, and, each time I do, I catch myself feeling just a bit disingenuous. Yes, as public intellectuals, it is our job to prescribe the medicine we think will improve the patient’s (i.e., civilization’s) condition. But is our prescription really capable of curing the disease?

Let’s face it: our patient’s condition is worsening. Further, we have seen cases like this before (i.e., there have been previous civilizations that overshot their environment’s carrying capacity), and in all instances, the outcome was dire. Nevertheless, following the discursive formula, a hypothetical treatment is proposed, consisting of energy substitution, massive resource efficiency improvements, wealth redistribution, and global governance; though it has never been tried, it seems to be our only hope.

A new school of environmentalist thought—sometimes labeled “doomerism”—holds that it is too late for such nostrums. The patient has no interest whatever in taking our medicine (sustainability proposals have been tabled at least since 1972’s Limits to Growth, but global elites have shown themselves completely uninterested in any course of action that does not promise continuing GDP expansion), and the disease is too far advanced (we have set in motion self-reinforcing geophysical processes that cannot be reversed). The most extreme doomers insist that near-term human extinction is now assured. Forget trying to save civilization, they say; think planetary hospice instead.

Doomerism has the virtue of willingness to look our predicament squarely in the face without flinching. But it has been criticized for underestimating the likely role of balancing feedbacks within both the environment and human society; further, it disempowers both its purveyors and its audience, who have a tendency to adopt an attitude of cynical, resigned apathy. Is there a third approach?

It seems to me we could start with a recognition that crisis is now assured. That does not mean near-term extinction is inevitable, but it does mean that this century will almost certainly see ecological, economic, and social upheaval on an unprecedented scale. The doomers are right in saying that it is late in the game, but wrong in simply giving up.

An alternative strategy would be to anticipate crises and use them to advantage. Such a crisis-led strategy would first seek to provide ways for people and institutions to adapt to coming changes in ways that create more community resilience and that meet basic human needs more sustainably over the long run. That would almost certainly imply different adaptive tactics for societies in varying stages of industrialization (or de-industrialization, as the case may be). A secondary strategy would be to widely and consistently publicize an ecological explanation for inevitable crises (overpopulation, depleting resources, pollution) that could at least partly reduce the social tendency to find scapegoats for declining economic conditions. This could avert a great deal of unnecessary conflict.

Crisis can be a teacher. All indigenous human societies eventually learned self-restraint, if they stayed in one place long enough. They discovered through trial and error that exceeding their land’s carrying capacity led to awful consequences. That’s why these peoples appear to us moderns as intuitive ecologists: having been hammered repeatedly by resource depletion, habitat destruction, overpopulation, and resulting famines, they eventually realized that the only way to avoid getting hammered yet again was to respect nature’s limits by restraining reproduction and protecting other forms of life. We have forgotten that lesson, because our civilization was built by people who successfully conquered, colonized, then moved elsewhere to do the same thing yet again—and because we are enjoying a one-time gift of fossil fuels that empower us to do things no previous society ever dreamed of. We have come to believe in our own omnipotence, exceptionalism, and invincibility. But we have now run out of new places to conquer, the best of the fossil fuels are used up, and the environmental consequences of burning them are starting to catch up with us. We can learn from crisis; cultural anthropology shows that. But, in this instance, we need to learn fast, and perhaps some organized effort to aid that process would be well spent. Planetary boundaries discourse could help explain to frightened masses why the world seems to be falling apart around them, while community resilience-building could help them adapt to changed conditions.

For the time being, most environmental activists will (and probably should) continue publishing new reports saying, “If we don’t change policies, terrible things will happen,” and, “If we do change policies everyone can live in peace and sufficiency.” I am merely suggesting that some of us might also be thinking strategically about what to do if world leaders do not adopt policies to drastically cut carbon emissions and redistribute wealth. Crisis-led community resilience seems to be the logical fallback plan.

Originally published at The Great Transition.