Tony Blair, Godzilla, and the Banquet of Consequences. In February 2003, in Dublin, I marched against the impending Iraq War alongside 100,000 other people.  Similar protests took place around the world that day, including around a million people marching in London. Today, 13 years, and 250,000 violent deaths later, with millions of people displaced, we now have official recognition of what those of us who marched knew all along, that we were right.  As Sir John Chilcot put it in his report published yesterday, “we have concluded that the UK chose to join the invasion of Iraq before the peaceful options for disarmament had been exhausted. Military action at that time was not a last resort”. I listened to Tony Blair’s press conference afterwards, full of proclamations that lessons have been learnt, but for me, in all today’s coverage, one fundamental lesson went unaddressed.

Blair said at one point in his speech that if we learnt the lessons of Iraq we could get to a point where we have “lasting peace in the place (the Middle East) where all this began, and where it must end” (emphasis mine). It seemed an extraordinary statement to me, and went straight to the heart of the issue whose surface was only scratched by Chilcot, namely that our actions have consequences.  Things don’t arise in a vacuum.

Terrorists and extremists rarely, if ever, simply arise, unprovoked, out of nowhere.  Even Godzilla arising from the ocean depths had a cause (nuclear testing).  Challenges and threats that we face don’t just appear spontaneously, like the aliens pitching up in ‘Independence Day’. It is a vital, vital lesson that we appear to be culturally hard-wired to ignore. 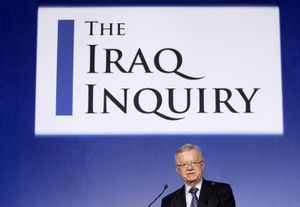 Robert Louis Stevenson is quoted as saying “sooner or later everyone sits down to a banquet of consequences”.  At the moment our collective social calendar is pretty solidly booked with banquet engagements, climate change being just one of the more obvious ones. We live at a time when our leaders have perfected the art of feigning surprise when bad things happen, as though those things have somehow emerged independent of the complex web of events, policies, deep cultural traumas, interventions, media distortions and cultural complexities that generated them.

For example, we like to tell ourselves that terrorism-related violence just arises spontaneously, that indeed, the Middle East is “the place where all this began, and where it must end”. I was fascinated by the video report recently that looked at the story of why Ibrahim Kamara and brothers Abdullah, Jaffar and Amer Deghayes left their family home in Brighton to go to join the jihad in Syria.   Were these young men fanatics, who appeared out of nowhere?  Their uncle had been imprisoned in Guantanamo Bay, but released without charge, at which point he returned to Brighton to join the family. The boys attended local school, grew up in our culture, but as the story’s author Mark Townsend writes:

“It is clear that the boys were facing a crisis of identity and longing, as well as suffering a range of violent threats, at home as well as on the street”.

We failed these boys, our society failed these boys, not anyone else’s society. Similarly, Michael Adebolajo, one of the men who killed Fusilier Lee Rigby, was born in Romford, Essex, and attended school here, and was clearly a young man with some serious mental health issues.

Omar Mateen, the gunman who carried out the worst mass shooting in US history at an LGBT nightclub in Orlando, grew up in the US education system, he wasn’t parachuted in from the Middle East, and his problems appear to have been far more related to issues around his family, his sexuality, and personal issues for which he received little or no support, rather than extremism. Yet as with the Paris attacks last year, political leaders are rushing to judgment: both Donald Trump and Hilary Clinton urged that the US ramp up its attacks on ISIS, despite the fact that there is little evidence to suggest that ISIS had anything to do with it.  We need to look closer to home.

On November 20th 1970, at the culmination of the Tate-LaBianca trial, Charles Manson testified before the court. He was on trial for supposedly co-ordinating the three young women and one man who had carried out a number of murders, members of a cult which he controlled. As part of his long, rambling discourse, he said “these children that come at you with knives. They are your children”.

What we are seeing happen in many of the so-called ‘terror-related’ events we see happening is, in effect, our children coming at us with knives. We live in a culture that marginalises people of colour, young people, working class people, exposes children to air pollution to an extent that increases mental health issues and to terrible diets that are creating a ‘diabetes timebomb’.  It puts young people under levels of stress through school that saps the joy from education.  It exposes them to 40,000 adverts a year. It denies young men any rites of passage to manhood, leaving the call to Syria and to “becoming a man” a far more powerful cultural narrative, for some, than that offered by the West.  It makes young women so conscious of their body shape that one in five 7-11 year old girls have been on a diet. The average age of the onset of depression used to be 30. It’s now 14.  And then we wonder why problems arise, why young people get lost, disaffected, isolated, and vulnerable to radicalisation.  Attempting to sort out these issues with drone strikes, or dropping bombs from thousands of feet in the air isn’t going to address what’s going on here.   We need to look closer to home. 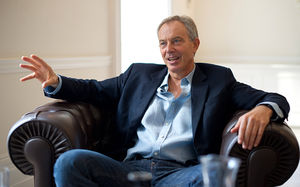 The Middle East is not “where all this began”.   Extremism is the result of hundreds of years of colonialism, of occupation and plundering of countries.  It is a direct result of the energy policy decisions taken by Western governments over the past 50 years, and of the alliances made to enable that (although oil was clearly the motive, not weapons of mass destruction, something Chilcot rather skates over).  It is a result of trade deals designed to enrich us and impoverish those we were trading with. Our disastrous approach of “my enemy’s enemy is my friend” and blundering interventions (Syria, Libya, Afghanistan etc).  ISIS didn’t land from Mars.  It was born in brutal US detention centres, the inevitable result of years of humiliation inflicted on the Middle East by Western governments.

And likewise, “where it must end” is here.  The UK needs to shift how it relates to the world, and the degree to which we recognise that the things we do have consequences.  It wasn’t just Blair that created the Iraq War.  It was the media, our political system, our establishment. The Sun newspaper, for instance, published, in 2003, a ‘dartboard of antiwar traitors’, since deleted from its website, which stated:

Score a direct hit on the war wobblers with The Sun dartboard. You can aim your own missiles at the cowards and traitors who opted to support Saddam Hussein rather than the brave troops who laid down their lives for freedom.

Looking back, I would have been proud to appear on that dartboard, but I’m sure I wouldn’t have felt so at the time. Don’t expect an apology anytime soon. And they all operate in a world that is only mindful of cause and effect when it suits them, but blind to it the rest of the time.

One of the best things about Transition for me is that we bring big issues home, and we own them.  We recognise their complexity, we recognise the role that we play in bringing them about, and we own our ability to do something about them. As Laurel Beck of Transition Pasadena told me in ’21 Stories of Transition’, “Transition changed my relationship to the problems”.

Unless our establishment is able to do the same, Chilcot may prove to have damned Blair, but business as usual will carry on much the same.  Blair repeatedly said that he took full responsibility for what happened.  But if anything, he modelled, and has come to personify, a culture that has perfected the art of taking responsibility for nothing.